Homo Luzonensis discovered in the Phillipines

A hominin third metatarsal discovered in 2007 in Callao Cave (Northern Luzon, the Philippines) and dated to 67 thousand years ago provided the earliest direct evidence of a human presence in the Philippines. Analysis of this foot bone suggested that it belonged to the genus Homo, but to which species was unclear. Here we report the discovery of twelve additional hominin elements that represent at least three individuals that were found in the same stratigraphic layer of Callao Cave as the previously discovered metatarsal. These specimens display a combination of primitive and derived morphological features that is different from the combination of features found in other species in the genus Homo (including Homo floresiensis and Homo sapiens) and warrants their attribution to a new species, which we name Homo luzonensis. The presence of another and previously unknown hominin species east of the Wallace Line during the Late Pleistocene epoch underscores the importance of island Southeast Asia in the evolution of the genus Homo.

Excavations in southeast Asia have unearthed a previously unreported hominin species named Homo luzonensis. The discovery has implications for ideas about early hominin evolution and dispersal from Africa.

Homo sapiens is the only living species of a diverse group called hominins (members of the human family tree who are more closely related to each other than they are to chimpanzees and bonobos). Most extinct hominin species are not our direct ancestors, but instead are close relatives with evolutionary histories that took a slightly different path from ours. Writing in Nature, Détroit et al.1 report the remarkable discovery of one such human relative that will no doubt ignite plenty of scientific debate over the coming weeks, months and years. This newly identified species was found in the Philippines and named Homo luzonensis after Luzon, the island where bones and teeth from individuals of this species were excavated from Callao Cave. Specimens of H. luzonensis were dated to minimum ages of 50,000 and 67,000 years old, which suggests that the species was alive at the same time as several other hominins belonging to the genus Homo, including Homo sapiens, Neanderthals, Denisovans and Homo floresiensis. 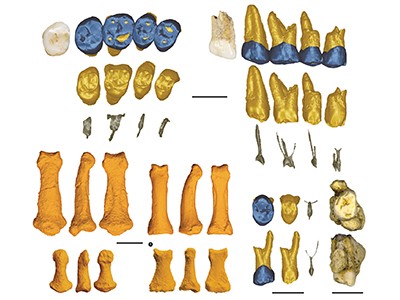 Rapidly changing knowledge about hominin evolution in Asia is forcing the re-examination of ideas about early hominin dispersals from Africa to Eurasia. Hominins appear in the fossil record about 6 million to 7 million years ago in Africa, and the earliest hominin fossils in Eurasia are about 1.8 million years old2. Explanations for the earliest hominin dispersals from Africa fall under what is known as the Out of Africa I paradigm3. Modern humans only come into focus in the Out of Africa II paradigm, which refers to the early dispersals of H. sapiens from Africa to Eurasia that first occurred in the past 200,000 years4.

Ever since Homo erectus was discovered in the early 1890s in Indonesia on the island of Java, this species has essentially been the only character of interest in the Out of Africa I dispersal events. The conventional viewpoint is that this intrepid hominin began to stride gallantly towards far-off places around 1.5 million to 2 million years ago (a dispersal that enabled it to ultimately occupy territory across Africa and Eurasia)3. Meanwhile, the other hominin species around at that time stayed in Africa, living on borrowed time and facing imminent extinction. Compared with H. erectus, these species — for example, other early Homo species such as Homo habilis, as well as the australopiths (hominins not in the genus Homo), which include Paranthropus and Australopithecus — had smaller brains and an anatomy that is less similar to that of modern humans. Indeed, as this simplified old story goes, how could such species possibly compete given the anatomical and probable behavioural advantages that H. erectus possessed?

Certain discoveries have challenged these entrenched ideas by raising the possibility that other hominins besides H. erectus dispersed from Africa to Eurasia during the Early Pleistocene (a period that occurred 2.58 million to 0.78 million years ago)5. Stone tools found in China are 2.1 million years old6, but no fossils as old as that have been attributed to H. erectus. It is also under debate whether H. erectus is the ancestor of H. floresiensis7, a species that lived on the Indonesian island of Flores. H. luzonensis provides yet more evidence that hints that H. erectus might not have been the only globe-trotting early hominin.

Détroit and colleagues have assigned seven teeth, two hand bones, three foot bones and one thigh bone to H. luzonensis. These remains, including one bone that was found previously8, came from at least two adults and one child. The teeth include two premolars and three molars from an individual’s upper jaw (Fig. 1). Overall, these teeth and bones have a striking combination of characteristics never before reported together in a hominin species.

When compared with the molars of other hominin species, H. luzonensis molars are astonishingly small, and the simplified surfaces of their crowns and their low number of cusps are features that look similar to the molar crowns and cusps of H. sapiens. Yet the shapes of H. luzonensis teeth share similarities with the teeth of H. erectus from Asia, and the size ratio of H. luzonensis premolars to molars is similar to that of Paranthropus, species of which are known for their massive jaws and teeth. The authors also used 3D imaging to examine the enamel–dentine junction (EDJ), which is an internal region of the tooth where dentine material meets the enamel layer. H. luzonensis premolar EDJs have a form that is distinct from that of hominins other than H. floresiensis. However, depending on the specific H. luzonensis molar that was analysed, the EDJs either look like those of H. erectus from Asia or like those of H. sapiens. This strange juxtaposition of features in a single individual’s jaw is completely unexpected and clouds our ability to reasonably assess, at least for now, the exact evolutionary relationships between H. luzonensis and other hominin species.

Although attempts to extract DNA from H. luzonensis specimens have so far been unsuccessful, the anatomy of the foot and hand bones of H. luzonensis strengthens the case that these remains represent a previously unknown hominin species. A foot bone called the third metatarsal has an anatomy in H. luzonensis that is distinct from that of other hominin species, including H. sapiens8. The authors’ 3D shape analyses of a H. luzonensis toe bone show that its shape is essentially indistinguishable from the toe bones of Australopithecus afarensis and Australopithecus africanus (Fig. 1), despite the separation of these australopiths from H. luzonensis by at least 2 million to 3 million years of evolution. Similar analyses found that a H. luzonensis finger bone most resembles the finger bones of australopiths and species of early Homo. Finally, the H. luzonensis finger and toe bones are curved, which suggests that climbing was an important part of this species’ behavioural repertoire, as was also the case for many species of early hominin9.

The discovery of H. floresiensis raised the question of whether it evolved from a species of early Homo7,10, for which evidence of its existence outside Africa has yet to be documented. Scientists are still struggling to answer this definitively11,12. The question is more pressing with the discovery of H. luzonensis, given the need to explain yet another hominin species that, like H. floresiensis, was around during part of the Late Pleistocene (defined as a period of time 126,000 to 11,700 years ago), had Homo-like teeth but australopith-like hands and feet, and that lived on an island only reachable after a major sea crossing. Perhaps H. floresiensis and H. luzonensis are both descendants of H. erectus populations that evolved separately on their respective islands for hundreds of thousands of years, if not more13,14. However, explaining the many similarities that H. floresiensis and H. luzonensis share with early Homo species and australopiths as independently acquired reversals to a more ancestral-like hominin anatomy, owing to evolution in isolated island settings, seems like a stretch of coincidence too far15.

Given the rich history of the Out of Africa I paradigm, unsurprisingly, H. erectus has been the centre of attention in ideas about early hominin evolution and dispersals in Asia. Nevertheless, it is worth considering how different these ideas might be if, in the 1890s, H. floresiensis or H. luzonensis had been discovered rather than H. erectus. Because H. luzonensis provides the first glimpse of a second hominin species living on a distant island at a time when H. sapiens populations from Africa were beginning to spread across the world, one thing can be said for certain — our picture of hominin evolution in Asia during the Pleistocene just got even messier, more complicated and a whole lot more interesting.

A New Human Species Once Lived in This Philippine Cave

New species of ancient human discovered in the Philippines

New Species of Early Human Is Even Smaller Than the ‘Hobbit’

New Species of Human, Homo luzonensis, Identified in the Philippines

View all posts by Razumov

“Grave of the Unknown Soldier,” a 1971 conté and ink on paper by Stanislav Szukalski. On view at Cal State Fullerton’s Begovich Gallery thorugh March 7.

“Blessing the New Citizen,” a 1968 conté on paper by Stanislav Szukalski. On view at Cal State Fullerton’s Begovich Gallery through March 7.

“Copernicus Capturing the Sun,” a 1970 graphite and ink on paper by Stanislav Szukalski. On view at Cal State Fullerton’s Begovich Gallery through March 7.

“The Lowing of the Ox for Wolin,” a 1958 conté and ink on paper by Stanislav Szukalski. On view at Cal State Fullerton’s Begovich Gallery through March 7.

“Krak at Confessional Oak,” a 1946 conté on paper by Stanislav Szukalski. On view at Cal State Fullerton’s Begovich Gallery through March 7.

“Monument for the Mermaid of Warsaw (detail),” 1958, a conté and ink on paper by Stanislav Szukalski. On view at the Begovich Gallery, Cal State Fullerton, Feb. 2-March 7.

“Longing,” a 1969 conté on paper by Stanislav Szukalski. On view at Cal State Fullerton’s Begovich Gallery through March 7.

“Screaming Gorilla,” a circa 1965 pen and ink on paper by Stanislav Szukalski. On view at Cal State Fullerton’s Begovich Gallery through March 7.

“Architectural Entrance,” a 1978 pen and ink on paper by Stanislav Szukalski. On view at Cal State Fullerton’s Begovich Gallery through March 7.

“Enslavement by the Predators (Design for the Back of Solzhenitsyn Medallion),” a 1975 graphite and ink on paper. On view at Cal State Fullerton’s Begovich Gallery through March 7.

“Bybyots,” a 1939 graphite and ink on paper by Stanislav Szukalski. On view at Cal State Fullerton’s Begovich Gallery through March 7.